Also featured in Tech in Asia

When you think of Vietnam, images of beautiful landscapes, exotic food and a dramatic history probably spring to mind. But many people do not realise that Vietnam is becoming one of the fastest growing markets in the world with its largest city, Ho Chi Minh City, being on track to become the Asian Silicon Valley (BBC, February 2016).

Vietnam’s commercial success has led to the internet and smartphone market expanding phenomenally, especially over the past decade where the number of internet users has increased from 4 million to 40 million (BBC, February 2016). The increase in internet use has been fuelled by the rise in smartphone adoption, with Vietnam having the fastest growing smartphone market in SEA (Warc, September 2015). At the beginning of 2016, 93% of the Vietnamese population owned a mobile phone; 55% of these being smartphones (We Are Social, January 2016).

Like many other emerging markets such as India and Indonesia, Vietnam has skipped the PC trend – under half (46%) of the population own a desktop or laptop computer (We Are Social, January 2016). Since 2015, the share of web page views on mobile grew a huge 40% compared to desktop page views dropping by a significant 9% (We Are Social). The Vietnamese are diving straight into a mobile-first market, which opens up ample opportunities for mobile web browsing. 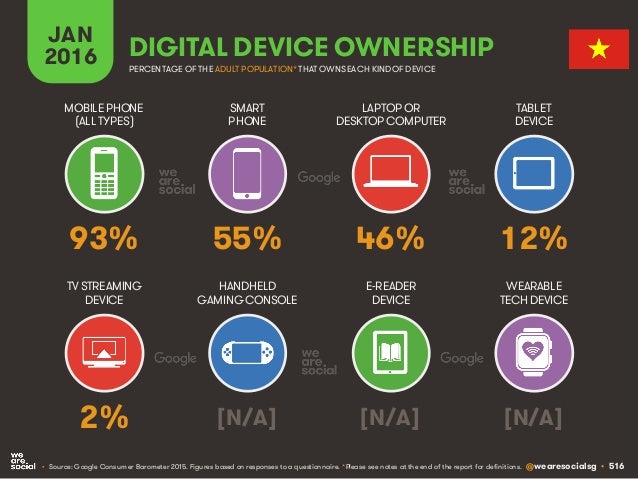 Source: We Are Social

So how do Vietnamese mobile users spend their time on the mobile internet?

Mobile users in Vietnam love to play games. The mobile games market in Vietnam is growing phenomenally, making up for 37% of the total market in the whole SEA region (Thanh Nien News). The majority of apps downloaded are gaming apps (Appotta, January 2016) – half of Vietnam’s 350 million app downloads are games, followed closely by social media and music.

The app download behaviour of Vietnamese consumers is in line with Morgan Stanley’s recent research on mobile web and app use. Morgan Stanley found that the mobile web audience is in fact 2x larger than mobile app audience and still continues to grow. They found that this was mainly due to users downloading apps for a specific purpose e.g. apps which are used on a daily basis. With Vietnamese mobile users downloading social media, gaming and music apps, it is fair to say that these fall under that category. The apps have a purpose. It is important therefore to understand that despite app downloads growing considerably in Vietnam, this should and does not take away the power of the mobile web.

In fact, Vietnamese mobile users love the mobile web. Search is the second most popular activity on mobile with 56% searching and browsing the mobile web at least once per week, following just short of people accessing social media at 59% (Appota Inc, September 2015).

This use of mobile search and hence the mobile browser makes a lot of sense, especially in a country where 3G connection speeds are the slowest in SEA (Ericson, September 2015)  and where over a third of consumers are still using non-smartphone devices (We Are Social). Therefore, consumers do not particularly want to be downloading apps when the mobile web fits their needs best. Apps also take up a substantial amount of mobile storage space so people are limited to how many they can download and apps are often bug-ridden, with many people complaining of them freezing and needing constant updates, which doesn’t bode well for customer retention. Mobile web browsing is a lost easier for research and speedy browsing, something that apps cannot do.

Despite popular belief, the mobile web is actually a lot more popular than people think and should not be underestimated. This is especially the case in emerging and developing markets such as Vietnam where the majority of phones are low-end smartphones or feature phones, where constant app downloading is not viable. Markets like Vietnam are fastly becoming mobile-first markets. It’s important to note the difference between the usage of apps and mobile browsers to better understand the mobile user and user experience.

AdSpruce focuses on delivering the best possible ad experience across all mobile browsers. From low-bandwidth phones in emerging markets like Vietnam, Indonesia and India to 4G smartphones in New York, London and Singapore, AdSpruce can provide the highest possible video advertising quality and experience. For more information about AdSpruce, please visit the website.